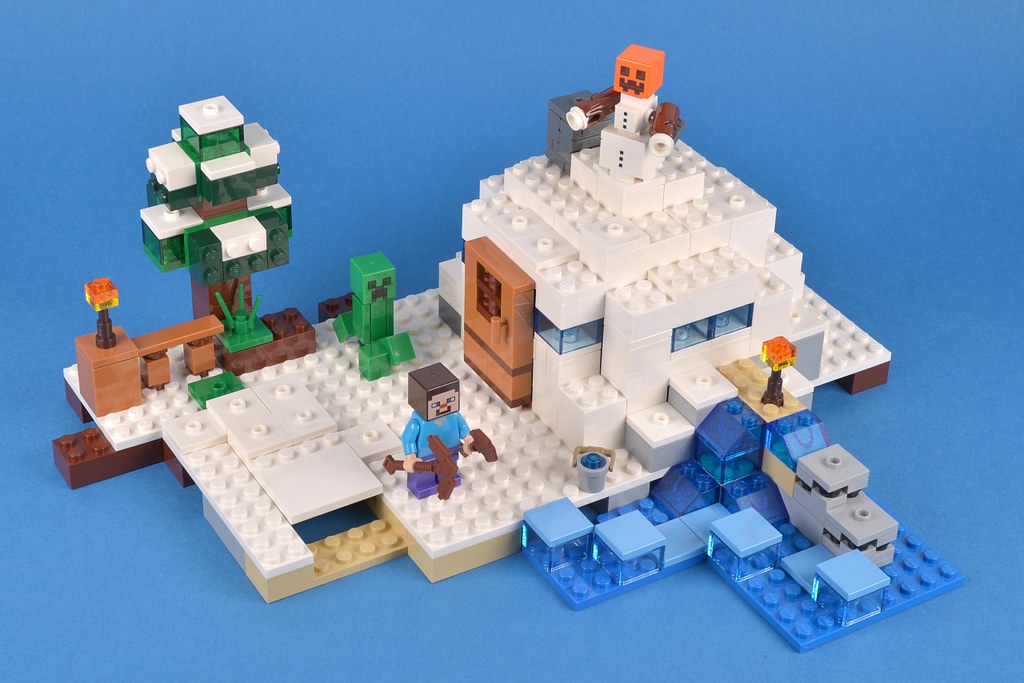 It is possible to build Snow Golems with Snow Blocks or use them as building materials. 4 Snowballs can be placed in a 2×2 square on the Crafting Table to create the Snow Block. You can put these blocks wherever you like, but they are most commonly used for decorating buildings. A shovel hit on a Snow Block will drop four Snowballs, allowing you to recycle materials. This guide is all about Minecraft snow blocks in detail.

The snowy biomes in Minecraft can bring a sense of the holiday season to the player. If you are in the snow in Minecraft, you will find rare items like igloos that are always loaded with loot, rabbits, foxes, and other creatures that are unique.

Snow does not only serve as a decorative element in Minecraft, but it also has other uses.

A snow block is one of the blocks in Minecraft. When snowfall occurs in Minecraft biomes that have snow, ground blocks are covered in regular snow. As well as snowy tundras, ice spikes, frozen oceans, snowy taigas, frozen rivers, and snowy beaches, there are biomes that can cause snowfall.

An enchanted shovel with silk touch is the only tool you can use to mine snow. Mining snow with a regular shovel destroys the snow itself, resulting in a snowball being thrown. A device will not cause anything to fall from the snow if it is used.

A snow block is made with snowballs, which are the essential ingredient. When you find an area covered in snow, make as many snowballs as you can with your shovel.

Snowballs can be gotten from the top of the ground with the shovel, or entire blocks can be broken with it. Snowballs are obtained by destroying the tops of snowy blocks.

Read more:Each And Everything You Should Need To Know About Loserfruit Skin In Fortnite

How to obtain a Minecraft snow block?

Using our character’s crafting slots is possible once we have accumulated enough snowballs.

The snow blocks are crafted using only four snowballs, so we will not require a crafting table. Your four snowballs can be placed in the four crafting slots. Each time these slots are filled, a snow block will be produced.

By doing this, more snowballs can be obtained, more enemies can be pushed, or blazes can be killed.

1.    Material for decoration or construction

Minecraft is a game where everyone tries to build something. Usually, these structures are home bases or tiny houses that offer shelter from mobs, the elements, or other criminal parts of the Over world.

Especially for igloo-like structures, snow can be used as a building material to add a unique aesthetic to the house. Apart from being a decorative block, snow can also be used as an interior or exterior decoration.

Snow can be helpful in certain circumstances despite its seemingly insignificant role in Minecraft. To get the whole snow experience, players should ensure they have a silk-touched enchanted shovel next time they find snow.

There are many high places in Minecraft, such as hills, mountains, and even structures, for players to explore. However, these structures can cause immediate death if they are fallen.

By using snow to break their fall, falls from a high place can be reduced in damage. Unlike other blocks, snow is lightweight and can reduce or even mitigate damage.

Whenever players venture out into the Minecraft Over world, they may encounter lava, fire, or something else that could burn them. The most effective way to extinguish a fire is usually by using buckets of water, but snow can also work in this situation. Setting a block of snow on fire and awakening through it causes the fire to be extinguished, keeping the players alive.

Creating hiding rooms in your home base is a Minecraft activity that players seem to enjoy. It can surprise visitors, and rare items can be hidden from prying eyes. Snow can be used to cover up secret rooms or entire bases. By covering a room or a house with snow, players are able to create a winter wonderland.

In the same way that iron golems offer protection in Minecraft, snow golems do the same. The goal of snow golems is not to protect entire villages but to protect the player.

In the Over world, place two full-sized snow blocks, then place a jack lantern on top. Establishing the jack lantern at the end of the block is necessary. Players will be protected from hostile mobs by a snow golem that throws snowballs at them. As well as luring groups into traps, they also set them up.

How can snow blocks be used in Minecraft?

Creating Snow Golems or building structures with the Snow Block is one of the uses of the Snow Block. 4 Snowballs should be arranged in a 2×2 square on your Crafting Table to make a Snow Block. Generally, you can place this block anywhere you like, but it is usually used for decorative purposes.

Does Minecraft allow you to melt snow blocks?

As opposed to regular blocks covered in thin snow, snow blocks in Minecraft won’t melt when you put bright objects next to them or be destroyed by water – which makes them an excellent building material.

Is it true that torches melt ice blocks?

In Minecraft, Soul Campfires, Soul Lanterns, Soul Torches, up to three Candles, and Redstone Torches do not melt ice. Each of these will not melt the ice underneath or around it when placed on a block of ice!

In Minecraft, what is the purpose of snow?

The use of snow as a building material for houses can offer a unique look, mainly when used for igloo-like structures. In addition to serving as a decorative block, snow can also be used inside and outside a home. Despite how little use snow may seem in Minecraft, it can prove immensely helpful in certain circumstances.

How can a snow golem be kept alive?

By bathing snow golems in constant supplies of Fire Resistance potions, you can make them survive in the Nether. Keeping it out of warm biomes will prevent it from taking damage from the fire effect. Fire doesn’t burn them; they melt.